I found this Lawless America attack video on the FB page of an AMPP member.. Warning this is graphic, and may be triggering!

Unhinged joined YouTube with the intent of creating this video and slandering, and attacking Bill Windsor and Lawless America: “(Video) Published on Jan 27, 2013
Lawless America has posted names addresses and personal information oF ABUSE SURVIVORS so their stalkers and abusers can now find them. Bill Winsore and Lawless America has put women and children in harms way because he is angry! Why is he so angry? Who know?”

One of the slides says “Danger Bill Winsore is angry with AMPP..” This specific mis-spelling on Windsor’s name has been used on various AMPP internet postings attacking Bill Windsor and Lawless America.

This is a very, vicious video not only attack Bill Windsor but likely triggering PTSD in abuse victims, and scaring domestic violence victims from seeking help..because it implies their trust will be violated, and the victims will not be safe.

Allegations in this video include:

-Bill Windsor is a sh– head
-Bill Windsor is delusional and paranoid
-Lawless America gave the address of abuse victims to their abuser
-And it implies that Bill Windsor actually abuses and beats women and children, or has contributed to domestic violence

Clearly, complaints should be handled in a professional manner-and this is not only inappropriate but meant to harm Windsor.

Further, if any of these individuals felt they are in real danger, and Windsor has compromised their safety, going online is not going to help! All the time they spent attacking Windsor, creating videos, creating fake profiles, creating fake Lawless pages and scaring people should be time spent safety planning, seeking resources/support services and making sure their children are not in harm’s way.. their own actions negate these charges, and show they are not really concerned about their safety, and they don’t view Lawless as a threat.

I find the images in this video exploit victims of domestic violences, whose trauma & bruises should not be used to further anyone’s personal agenda. Domestic violence is real, and is very serious.

Strong words from Bill Windsor of Lawless America, denouncing American Mothers Political Party (AMPP) as a hate group. Windsor begins this video by naming the allegations AMPP has levelled against him–that he is a pedophile, supports abusive men, is a liar, a fraud, is greedy and worse.. And firmly states that “none of those are true, not a word is true”.

Windsor states: “I have dedicated the rest of my life, at no compensation, to save America from the government and political corruption. And now I am going to have to carve out a portion of that to try to expose the corrupt, dishonest women, who are out there abusing the family court system.

Now I have many wonderful friends that I made, who are family court victims, who are women, and I believe them. But I don’t believe these women. People who lie and make up things like this, cannot be trusted, cannot be believed, in my opinion, this is a hate group, the American Mothers Political Party. In addition to doing everything I can to save America from government and political corruption, I’ll be darned if I am not going to do everything I can, to expose each of these people, and this organization for what it is, it needs to be shut down, their website, their facebook page, the mere existence of this thing needs to be wiped off the earth.

..I have given everything I got, at no compensation, to go out and help people, and the ultimate slap in the face, well it’s more than a slap in the face, it’s not even words can describe it, the ultimate, insult is for these lying, dishonest, vicious, manipulative, sick people to attack me, slander me viciously, turn people against me who have been very supportive, and they are doing huge damage to the family court battle that exists in the United States to get things get corrected..

Folks none of this stuff is true, I put explanations of this on the website, there is not one iota of truth..”

“Lawless America has been suspended by Facebook. Bill Windsor and Lawless America have been attacked, libeled, slandered, and threatened by people associated with the American Mothers Political Party, and others.” 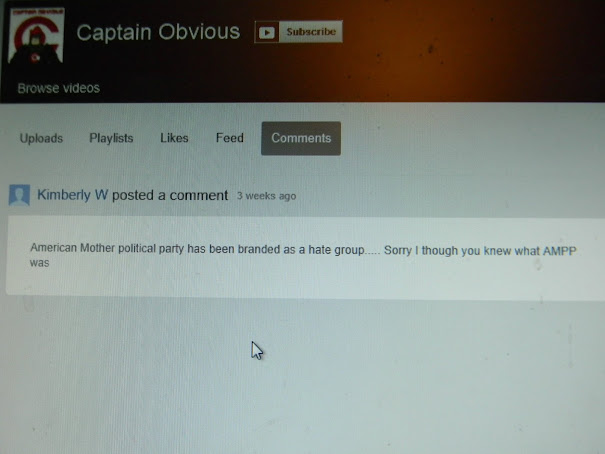 American Mother political party has been branded as﻿ a hate group….. Sorry I though you knew what AMPP was