In review of our past posts, ATW has noticed because of the facts we have gathered, Claudine Dombrowski, of AMPP, has largely been presented in a negative light. Because of this, we are thrilled to announce something to report truly positive about Claudine…keeping in mind, that ATW only posts the truth backed up with proof or evidence, we want to take this opportunity to announce a new award specially designed for her.

Hats off to you Claudine aka Petunia Pig of the Glenn’s Cult Blog aka Angelz Fury aka Holocaust Historian Extraordinaire aka The Talking Vaginas aka Rhedde Carpet aka Impersonator of William M. Windsor aka Member of Alzheimer’s Lesbian Support Channel aka Dastardly Dads aka Walk On With Hope in Your Heart and You Will Never Walk Alone aka Powerpuff Girls and all those other aliases used…

The positive news is that Mothers are leaving AMPP, and are seeing the truth about Claudine’s “Wild Goose Chase” known as the American Mothers Political Party (AMPP).

According to a comment on a page supporting Fathers and parental rights…“(Claudine) has caused a backlash from women in paternal families who are flocking to father’s rights groups in numbers I have never seen before. In essence, her (Claudine Dombrowski) and the likes of Barry Goldstein are responsible for the massive father’s rights movement.”

As such, we are giving Claudine the Mother Goose Award because she has led the Mothers on a “Wild Goose Chase” pretending to be an anti-abuse advocate who then has viciously attacked other Protective Mothers and Advocates like an abuser. Claudine has disgraced the Mother’s Movement and harmed the cause of family court reform  with her outrageous and criminal behavior. 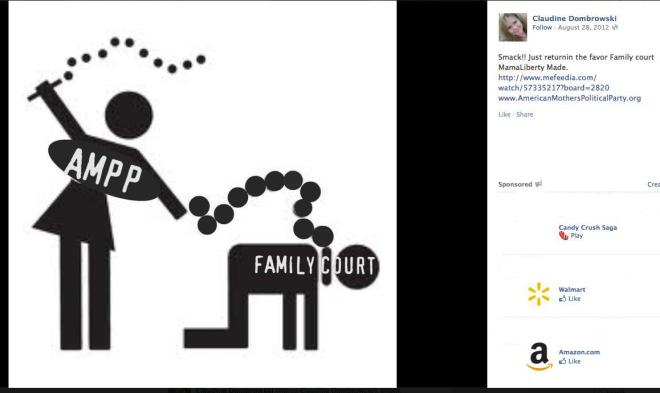 This screen shot posted by Claudine showing a woman whipping a man who is wearing a collar with chain connecting to AMPP, with “family court” written across his body, as he bends over on his hands and knees, is one example of how Claudine has disgraced the Mother’s Movement, and why she deserves this award.

Here’s to you Claudine… Honk! Honk!